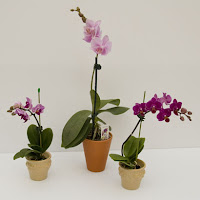 I had planned to have Easter dinner at my new house this year with lots of family. But plans changed. Many of you know about a month ago, my father-in-law was diagnosed with pancreatic cancer. After further tests, we learned the cancer spread throughout his body. He is 81 years old and has declined treatment, not wanting to be in anymore pain.  Last week he was admitted to a Hospice center and today we visited him.

When we arrived we were told  that he had received pain medication and would most likely be sleeping through our visit. It didn't matter. We sat next to him anyway. I watched as my husband tried to communicate with the man that raised him. My father-in-law kept slipping in and out of slumber, responding more to the conversations in his dreams than to my husband.

A woman and young girl, who I assumed was her daughter, came to the door. She asked if they could come in. We said yes but indicated my father-in-law was in no shape for a visit.

"That's okay. I just wanted to drop off this orchid for him," she said.

She pulled out a mini purple orchid that was planted in a small, white pot. "Orchids don't need a lot of sun or water."

The flower was beautiful. We put it on the windowsill and gazed at it.  A moment of silence for the reality that was around us. She was giving orchids to each patient in the center. She told me her name. I was so moved by her kindness, and weighed down with the emotions of the day that I simply cannot remember that name now. I don't think it matters. It is her actions that I will always remember.

The ability to bring a bright spot of beauty to an otherwise dark situation is such a gift. We all have this gift. We can bring orchids to the dying. Roses to the sick. Brownies to the lonely. Or just a soft shoulder when needed. Each one of us has the ability to take time from our busy lives to share in the sorrows and joys of another.

I encourage you to learn from the woman with the orchid as I have.  Think about how you can make a difference in someone's life. Even the smallest pebble can create the biggest ripples.