The question that has come up the most this month from our non-vegan friends has been:
"WHAT ARE YOU GOING TO EAT ON THANKSGIVING?"
Every year we go to my sister-in-law's house and since they own a farm it is safe to assume they are so...NOT VEGAN. Although we have decided to bring some of our own side dishes, we wanted to try the Tofurky Feast many vegans enjoy on this holiday.
In addition to the turkey promotion, Shoprite was also giving away a Tofurky Feast for free if you spent $300! We got ours and tonight was our own special little vegan Thanksgiving. 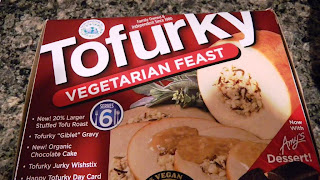 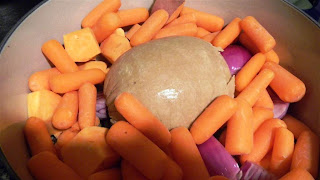 It was DELICIOUS! No, it didn't taste like turkey but that is the whole point of becoming vegan, isn't it? 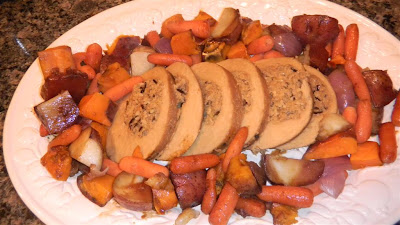 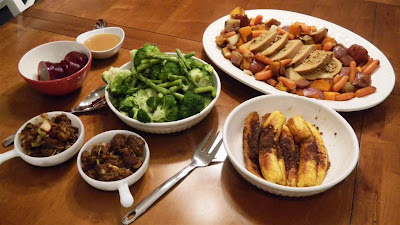 Tofurky Roast
Roasted Root Veggies
Sweet & Spicy Plantains
Steamed Broccoli & Asparagus
Pumpkin Bread Stuffing (Recipe Below. YUM)
Tofurky Gravy
Canned Cranberry Sauce (The best kind)
I love the idea of using pumpkin bread in a stuffing recipe. It adds such richness and flavor to the Thanksgiving meal. I used this recipe from the No Meat Athlete for the pumpkin bread. It makes two loaves and I used both loaves in the stuffing. I cut the sugar to one cup for this dish. Make the loaves a few hours ahead of time so they have time to cool. The stuffing is sweet and savory with flavors of apple, sage, and rosemary. Definitely try this for Thanksgiving! It is a winner. 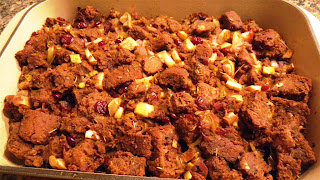 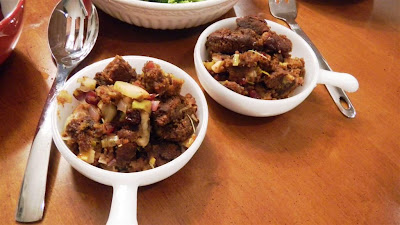